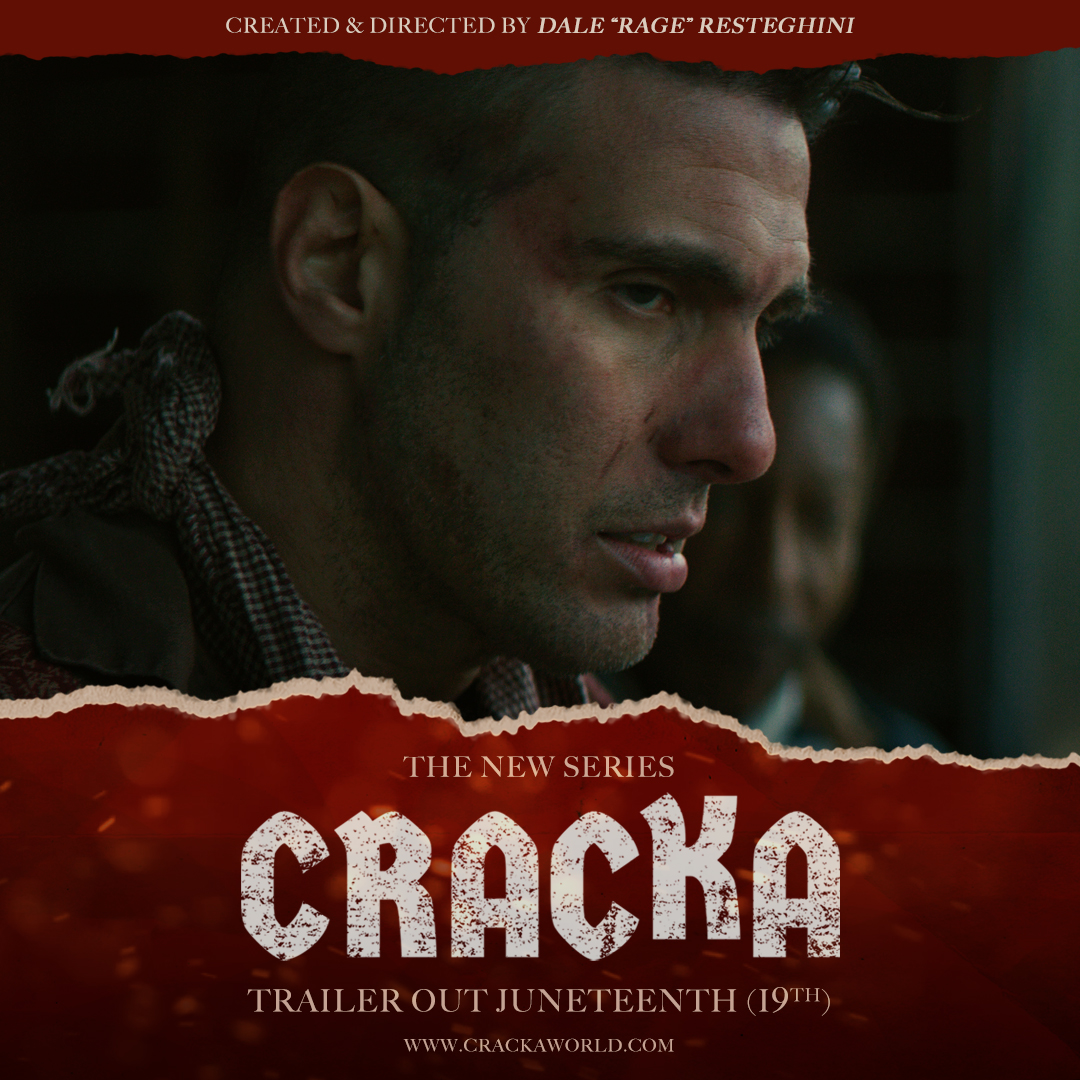 In a new upcoming TV series “Cracka,” a white neo-Nazi, played by Lorenzo Anotonucci, is subjected to cruelty from black slave holders. It is a world where the white people are the slaves and the black people are the slave owners, a reversed point of view meant to raise awareness to the ongoing racism battles in America. The film answers the question “What if the roles were reversed?" “Cracka” is directed and written by Dale Resteghini, coming out as a TV pilot sometime in late summer or early fall on Amazon Prime, iTunes, and Google Play. In regards to the series, Antonucci says: “Everyday should be freedom day.”

Antonucci is an actor, a producer and a writer who was born in Brooklyn, NY, and raised in Queens. In his younger days he was part of a band called “Sworn Enemy,” formed in 1997. Even though he loved music, Antonucci was told he also had a lot of potential for acting. He was given the opportunity to move to Hollywood and pursue wrestling and acting at the age 36. His passion, stemming from his Puerto-Rican and Italian roots, lended him roles in the comedy “What Now” (2015), “Deet ‘n Bax Save The World” (2015), as well as four episodes of “Days of our Lives” (2016-2017) and “A Haunting at Silver Falls 2” (2019). Antonucci has worked among big Hollywood names such as Dwayne Johnson, Bella Thorne, Cameron Boyce, Drea de Matteo, Perry Reeves, Mark Boone Jr. Ryan Hurst, John Bradley and Booboo Stewart.

Antonucci is also an executive producer, an actor and a writer on the “Paradise City” series, which currently has eight completed episodes. Other film and TV releases Lorenzo is currently working on and guest-starring in are a pilot shooting in September, called “Scarlett,” playing Steven Bauer’s son; “The Free Fall” (2019), an independent horror film starring Andrea Londo and Shawn Ahsmore (set to release 2020); Episode 5 Season 8 of “Game Of Thrones” (2019) alongside Aaron Rodgers as a cameo; and two episodes of “Ballers” (2018) on HBO alongside Dwayne Johnson. Lorenzo also serves as VP of Business Development and A&R at a media company. He was also a co-owner of a recording studio in Salzburg Austria, RockHard Studio.

Cultured Focus Magazine had a chance to talk to Antonucci and ask a few questions about his career and film experience.

You are starring in the new series “Cracka.” Tell us more about it.

I look forward to showing the world what we have cooking in the series. Dale created something very special and I'm excited to be on the ride alongside him. I am starring in it and I'm an executive producer, which means a lot to me - hard work pays off. We’ve been breaking our asses on this thing for three years now.

How does it feel playing a white neo-Nazi in “Cracka”? What are your thoughts on the series and how do they relate to today’s Black Lives Matter movement?

Playing a Nazi is just acting. It was definitely a hard role to play. Channeling where this character draws so much hatred from was probably one of the hardest things I had to do in my life. I’m Puerto Rican and Italian raised on Jamaica Ave in Queens, NY. There is no such thing as Nazis and white supremacist on my block (not that I have ever seen any anyway). I think the Black Lives Matter movement is so powerful and I back it up 1000 percent because it’s all positive forward thinking. Black Lives do matter! When did people in our generation think it didn’t and why? I find it mind boggling that it even exists in 2020. My bloodline is of African decent and that’s what I think separates me from a lot of the other actors who had to play such polarizing roles when being in the shoes of a white supremacist. My thoughts on the series “Cracka” is that it will take you on a fantastic journey to see the shoe on the other foot. We’ve seen it all and read it all in our history books the other way around. Now it’s time for them to see it flipped. It’s just an art with a message…

Tell me about your journey as an actor. Where did you start from, what have you achieved and where do you want to be in the future?

When I first moved to LA in 2013, I had no idea about acting or how to get in the game. I moved here to wrestle and my roommate at the time said I should go get my headshots done. I had no idea what headshots were either. My constant hustling led me to do “What Now” (2015), four episodes of “Days of our Lives” (2016-2017) and “A Haunting at Silver Falls 2” (2019) to build my career. I’m also featured in “Paradise City,” starring big names such as Bella Thorne, Cameron Boyce, Drea de Matteo, Perry Reeves, Mark Boone Jr, and Ryan Hurst. I want to achieve the goals of the greats like Sylvester Stallone and Dwayne (The Rock) Johnson.

What films and productions have you been a part of? What big stars have you met and what have you learned from them?

I worked on “Ballers,” “Game Of Thrones,” “Days Of Our Lives” and “Paradise City” and meet/worked with stars Dwayne Johnson, Peter Dinklage, Drea de Matteo, Ryan Hurst, Perry Reeves, Bella Thorne, Cameron Boyce (may he rest in peace), John Bradley, Booboo Stewart and Mark Boone Jr. I’ve learned that all the people I just mentioned showed me a lot of love and treated me like they knew me their whole life and that to me is why they are who they are. Thank you for being great humans!

What advice do you have for other inspiring actors? Any mistakes they can avoid in this entertainment business?

In your own words, who is Lorenzo Antonucci and what can he teach us with his story?

I’m a man that came from a great family that had no money. I'm honest and always willing to give and never with the intention of getting. I always try to make everyone laugh while we’re all working hard because laughing is the best medicine. I will inject inspiration to anyone I’m surrounded with and try to make them feel like a million bucks. I put out the energy I'd love to receive - energy is like radio frequencies and we all tap into them.

Tell us about “Sworn Enemy” and your music career before you became an actor.

“Sworn Enemy” began in 1999 and we started touring the United States for the first three years independently until we signed to Elektra Records, releasing our debut album “As Real As It Gets.” We toured around the globe for 10 years and I decided to leave the band in 2009. I wanted to do something more but I had no clue what it was. “Sworn Enemies” first record was one of the biggest accomplishments I had to that date when we released it in 2003. I would love to tour again someday in the future.